Hirranyaa Rajani is just seven years old, but she looks to be already on her way to achieve great things.

A student at the Oberoi International School in Mumbai, she’s developed an app that could help train hearing impaired people in sign language from their own homes.

Hirranyaa has been learning coding through White Hat Jr, an online platform that teaches kids how to code. With enough experience, she realised she now had the capability to build an app. And the first thing she thought about was how to build an app to help people like her brother.

You see, Hirranyaa’s brother is confined to a wheelchair, so she’s always been really empathetic towards the needs of people with handicaps. While thinking of how to use her newfound ability to code to help him, she realised she could instead help people with hearing impairments.

Hirranyaa saw how deaf people communicate with sign language and was intrigued by it. This led her to create an app that helps teach a deaf person sign language from the comfort of their own home.

It’s basically a sort of digital flashcard system. Simply pick one of the many basic words available in the app, like “please”, or “hello”, or “emergency”, and it shows you a digital animation of the respective sign. Additionally, it has a feature where the user enters a word they need to know in sign language, and the app picks out the letters and translates each of them into the respective sign.

This is called finger spelling, which is basically a way to spell out a word in sign language. It’s great for when you want to ask someone else what the sign for a word is, or spell out a name of a person for instance. 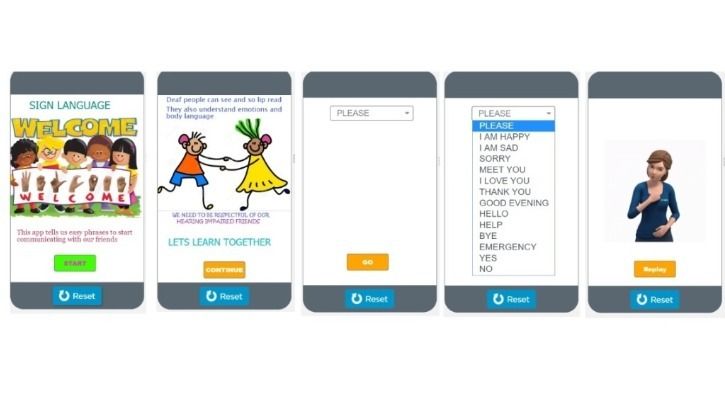 Such an app would be especially useful for kids born deaf or users that have permanently lost their hearing in adulthood. It’s an easy way to get into the basics of essentially learning a whole new language, while still in a comfortable space by yourself.

For now, Hirranyaa is still improving her grasp of coding, in the hopes that she can build something to instead help her brother in the future. But in the meantime, building an app at age seven is still impressive enough.

As students show up, rural schools to stop online classes

When Will CBSE Conduct 10th, 12th Board Exams?

As students show up, rural schools to stop online classes

When Will CBSE Conduct 10th, 12th Board Exams?

ABOUT US
Campus Varta is India's first EdTech Media, that connects rural schools, colleges and universities on a global platform. It's a definitive platform for Youths of India related to Campus Updates, Youth Mauka, CV profiles, Campus Events and CV Academics and so on.
Contact us: campusvarta@gmail.com
FOLLOW US
© copyright @ campus varta